“Ghosts are like cats. They’re real — but they don’t come when called.”
— Vera Van Slyke

Help for the Haunted: A Decade of Vera Van Slyke Ghostly Mysteries is a composite novel that chronicles thirteen distinct yet interwoven supernatural investigations conducted by ghost hunter Vera Van Slyke. She was a journalist in the era of Nelly Bly, Upton Sinclair, Ida Tarbell, and other muckrakers. After Vera defrauded the psychic medium Ludmila Prášilová, the two women agreed to investigate reports of a ghost. They went on to form a friendship that rivaled Sherlock Holmes and Dr. Watson’s. Click here for details about these sometimes chilling, sometimes funny, always mysterious ghost hunts.

Guilt Is a Ghost: A Vera Van Slyke Ghostly Mystery is a novel that provides a full account of the first meeting between ghost hunter Vera Van Slyke and her “Dr. Watson,” Ludmila Prášilová. The year was 1899, and Ludmila was a phony medium conducting a séance at the Morley Mansion — but it ended tragically. By 1903, Ludmila had reformed and had become good friends with Vera. This was the same year when they were asked to return to the Morley Mansion to investigate the very haunting that they had brought about! This is the second in the Vera Van Slyke Ghostly Mysteries series, but you can either start here or with Help for the Haunted. Click here for more description and ordering information. 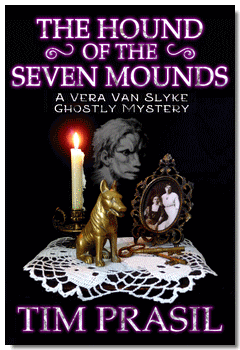 It’s 1923, and Vera has been asked to join an investigation of a weird creature roaming the fields and pastures of a rural region in Oklahoma. Not only does the supernatural thing shepherd a pack of fierce and and hungry dogs, it’s described as looking part-canine itself! Since it seems to be something other than a ghost, will Vera’s expertise be enough to solve the mystery? (And where is Lida?) This is the third novel in the series, but like the earlier two, it can be read independently. Click here for more description and ordering information.