Algernon Blackwood left a puzzle for fans of occult detective/ghost hunter fiction. It’s his four stories featuring a character named Jim Shorthouse. From what I can tell, the first one published was “A Case of Eavesdropping,” which appeared in the December 1900 issue of Pall Mall Magazine,  and the remaining three Shorthouse tales were first published in Blackwood’s collection The Empty House and Other Ghost Stories, which also reprinted the first.

The puzzle is 1) why Blackwood scattered the stories throughout the collection rather than putting them side-by-side and 2) why they seem to be in no particular order at all even though Shorthouse clearly evolves. The solution might well be that, even when put into a seemingly sensible sequence, the stories still feel a bit disjointed — as if Blackwood never saw them as a cohesive series but just found the name “Jim Shorthouse” interesting or handy. Scattering and jumbling the four stories in The Empty House and Other Ghost Stories reinforces the idea that they were never meant to be read as sequential.

Just the same, I suggest that there is a fairly logical order to the tales, one that reveals Shorthouse’s growth toward becoming a proper occult detective as well as the character’s evolution in mastering fear. The order I suggest is this: “A Case of Eavesdropping,” “The Strange Adventures of a New York Secretary,” “The Empty House,” and then “With Intent to Steal.”

I suspect most readers would agree that “A Case of Eavesdropping” should come first. By itself,  it really doesn’t qualify as an occult detective story, since a young Shorthouse arrives in (presumably) New York City from England, moves into a room with noisy neighbors, gets very scared when he discovers they’re dead, and ends the story by vamoosing. There’s no detecting, no mystery solving, no detective/client or detective/criminal relationship. However, we do learn that Shorthouse can see ghosts when others cannot. This is a first step toward becoming a divining-detective when read with the other tales in mind. Also, when young Shorthouse flees the haunted room in the end, we see that fear has beaten him.

In a way, the next story in my ordering of them is the oddest, perhaps as its name suggests: “The Strange Adventures of a New York Secretary.” The fact that “Eavesdropping” and “Strange Adventures” are both set in New York is the first clue that they belong together. (Though it’s inconclusive, “Empty House” and “With Intent to Steal” suggest that Shorthouse has moved back to England.) More importantly, “Strange Adventures” presents a more settled, more mature Shorthouse. He’s considering his financial future, after all. He’s not much more adept at occult detection, though he jokes about feeling like a detective at one point. Despite these small steps forward, he’s now much tougher when it comes to coping with the crazy (and kind of hokey) menagerie of Gothic creepiness into which Blackwood drops him. Important to his overall character evolution, he’s now much more cognizant of how to manage, if not master, his fear.

Moving on to “The Empty House,” Blackwood quickly describes Shorthouse a “young” man, but he somehow feels older than a secretary running an errand. I think it’s because of the introduction of the character’s wrinkle-cheeked, “elderly spinster aunt.” Not his grandmother, mind you, who would be a full two generations removed — his aunt. Add to this the fact that Shorthouse reveals clear signs of having become a good ghost hunter. This time, he doesn’t just accidentally discover himself in a haunted place; he accepts an invitation to explore one! And he knows the right and proper investigative routine, making notes as he goes. 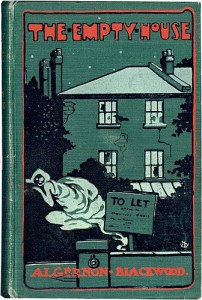 Nonetheless, one still could probably swap “Empty House” and “Strange Adventures” either way if not for two more considerations. First, Shorthouse is advancing in terms of facing fear, since this time he has to manage not just his own fear, but that of his aunt, too. Second, Shorthouse’s added burden of having his aunt as companion on an occult investigation leads especially well into the final story, which illustrates the value of having a companion along when ghost hunting.

Much as it’s easy to put “Eavesdropping” first, it’s also easy to put “With Intent to Steal” last. Shorthouse is now decidedly more mature — even worldly — and he’s fully committed to combating supernatural evil. His relationship with a companion, as I say, is also central to this case. That companion serves as the narrator in the style of Dr. Watson, reinforcing the notion that Shorthouse has very much arrived as a true occult detective. As the two characters spend the night in a haunted barn, Shorthouse tells of his earlier experiences, and a reader might wonder if the companion here isn’t, in fact, the narrator of the earlier three stories, too! Blackwood never settles that issue, though.

Nonetheless, the author does confirm that even a Sherlock Holmes can benefit from having a Dr. Watson at his side. This tale brings Jim Shorthouse to fruition, from a naïve victim who helplessly flees from ghosts to a mature vanquisher of supernatural fiends, one wise enough to know when help is needed.