Help for the Haunted: A Decade of Vera Van Slyke Ghostly Mysteries is a composite novel that chronicles thirteen distinct yet interwoven supernatural investigations conducted by ghost hunter Vera Van Slyke. She was a journalist in the era of Nelly Bly, Upton Sinclair, Ida Tarbell, and other muckrakers. After Vera defrauded the psychic medium Ludmila Prášilová, the two women formed a friendship that rivaled Sherlock Holmes and Dr. Watson’s. Click here for details about these sometimes chilling, sometimes funny, always mysterious ghost hunts.

Guilt Is a Ghost: A Vera Van Slyke Ghostly Mystery is a novel that provides a full account of the first meeting between ghost hunter Vera Van Slyke and her “Dr. Watson,” Ludmila Prášilová. The year was 1899, and Ludmila was a phony medium conducting a séance at the Morley Mansion — but it ended tragically. By 1903, Ludmila had reformed and had become good friends with Vera. This was the same year when they were asked to return to the Morley Mansion to investigate the very haunting that they had brought about! This is the second in the Vera Van Slyke Ghostly Mysteries series, but you can either start here or with Help for the Haunted. Click here for more description and ordering information.

Entranced by Eyes of Evil: Tales of Mesmerism and Mystery presents stories about sinister mesmerists and characters who suffer the consequences of dabbling in hypnotism. This once-popular genre, which one critic termed “Hypnotic Fiction,” includes works by Edgar Allan Poe, Louisa May Alcott, Arthur Conan Doyle, and Ambrose Bierce. Entranced by Eyes of Evil is the first volume in the Phantom Traditions Library, a series of anthologies that resurrect quirky genres of fiction from the 1800s. Click here to learn more about the book and the series.

Echoing Ghost Stories: Literary Reflections of Oral Tradition presents twenty ghost stories, each one designed to capture — or spin — the centuries-old tradition of sharing such tales out loud. In other words, these are works written as much for the ear as for the eye. The authors include Harriet Beecher Stowe, Ambrose Bierce, Edith Wharton, M.R. James, and E. Nesbitt. Echoing Ghost Stories is the second volume in the Phantom Traditions Library, which is comprised of “forgotten” genres and sub-genres of speculative fiction from the 1800s and early 1900s. Click here to learn more about the book.

Ghostly Clients & Demonic Culprits: The Roots of Occult Detective Fiction presents stories that trace the long history leading to characters such as Agents Mulder and Scully, Buffy the Vampire Slayer, and Sam and Dean Winchester. The curious cross-genre of detective and supernatural fiction has its roots in ancient Rome, where two “master plots” emerged. The first involves a character whose courage and intelligence solves the mystery of a troubled spirit: a ghostly client. In the second, a character must investigate and vanquish a much more wicked supernatural foe: a demonic culprit. The authors include E.T.A. Hoffmann, Charlotte Riddell, Arthur Conan Doyle, Rudyard Kipling, Arthur Machen, and more. Click here to learn more about the book. 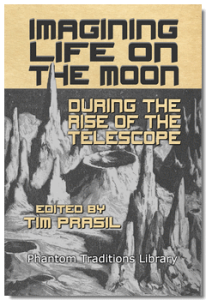 Imagining Life on the Moon During the Rise of the Telescope presents three centuries of fictional depictions of lunar inhabitants. The voyage begins in the early 1600s, when telescopes first appeared, and ends in 1900, when advanced telescopes had verified that no life exists on the Moon. With authors including Washington Irving, Edgar Allan Poe, and others less remembered, this anthology charts the emergence of science fiction as we know it today. It also weaves this genre with displays playful fantasy and subtle satire. Click here to learn more about the book.

Spectral Edition: Ghost Reports from U.S. Newspapers, 1865-1917 features real newspaper articles about haunted houses and graveyards, haunted roads and rivers, even haunted people. Between the U.S. Civil War and the nation’s entry into World War I, journalists treated such hauntings with the same seriousness as any newsworthy event. Spectral Edition offers full transcriptions of 150 ghost reports — the scariest, strangest, and funniest discovered by Tim Prasil. Click here for sample articles and further details.

The Victorian Ghost Hunter’s Casebook features fourteen paranormal investigations as chronicled by writers of the Victorian era (1837-1901). Among the investigators are Charles Dickens and Arthur Conan Doyle. Read about a room that drains people of their energy, a house visited by gnome-like spirits, an Irish poltergeist, a case handled by the Society for Psychical Research, and more. Along with enlightening details on each case, Tim Prasil provides a well-researched Introduction about how the Victorians revitalized serious interest in ghosts and about the history of ghost hunting that came before Victoria’s reign. Click here for further infomration.

Did the gloomy — but also snarky — Edgar Allan Poe ever write limericks? That question is raised by The Lost Limericks of Edgar Allan Poe, which offers 100 limericks about Poe’s work, his life, and his world. The poems are mostly witty, often spooky, and at times, a bit serious. (It wouldn’t be like Poe for any to be bawdy, though!) Carefully footnoted, this book will appeal to readers hoping to learn more about Poe’s writing and life as well as those already familiar with him. Click here for sample limericks and further details.

Go to the Home Page.