Ava Goodrich-Freer was inducted into the Ghost Hunter Hall of Fame quite some time ago. Though she conducted a number of ghost hunts, probably the most famous and controversial was at Ballechin House, called “Scotland’s most haunted house.” John Crichton-Stuart, 3rd Marquess of Bute — a.k.a. Lord Bute — rented the place for three months. Goodrich-Freer agreed to oversee its investigation during that time, and this involved several additional ghost hunters coming and going. Some of these visitors were members of the Society for Psychical Research. One visitor, presumably not a member of the Society, wrote a strong opinion piece on the affair for London’s The Times. This article dismisses the reality of the haunting itself, snubs Goodrich-Freer’s abilities, and lashes out at the Society.

My recent research has led back to Ballechin House, and I managed to find some tricky-to-access sources that might prove valuable to researchers in the quirky field of historical ghostlore. This isn’t everything I found, just what I feel is the most interesting and revealing. 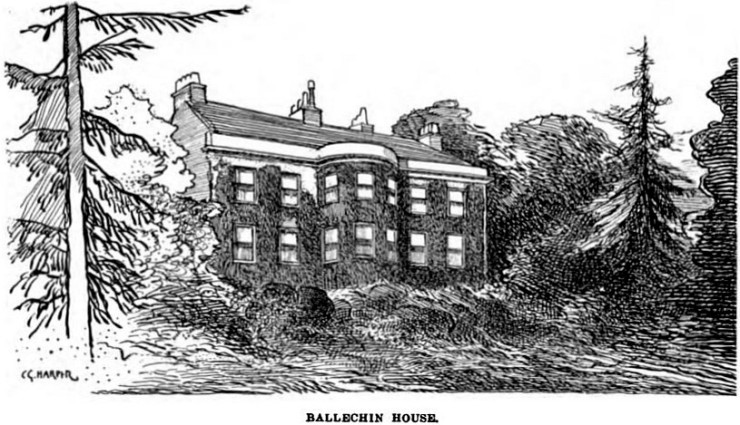 We’ll start with the article that inflamed the controversy, written by someone identified only as “a correspondent.” The piece is designed to debunk the haunting, and the Society’s previous investigations are described as “perfunctory and absurd” for their short durations. (Ironically, the correspondent was himself only at the house a couple of days.) Though Lord Bute was smart to extend this probe “over a considerable period,” the correspondent suggests, he erred when assigning Goodrich-Freer to oversee things. Why was this a mistake? Well, “simply because she is a lady, and because she had her duties as hostess to attend to, she is unfit to carry out the actual work of investigating the phenomena in question.” Welcome to 1897. The correspondent goes on to attribute the manifestations — most of which were audible — to pipes, rats, noises carrying from adjoining rooms, and maybe a prankster. Superstition and similar factors explain the reports of visual phenomena. The piece ends with a scathing attack on the Society, which is accused of employing methods that are “extremely repulsive. What it calls evidence is unsifted gossip always reckless and often malignant; what it calls investigation would provoke contempt in Bedlam itself. . . .” Why a ghost hunt would prompt such a tirade will probably never be known.
“On the Trail of a Ghost,” Times [London], 8 June 1897, p. 10.

Over the next several days, there came a flood of letters-to-the-editor in response to the article. One of the earliest is from Goodrich-Freer, who identifies herself as the hostess but who also signs the letter with “X,” her usual pen name. She defends the merits of the investigation and rebukes the writer for having exposed the name of the house. (There’s an editor’s note at the end saying the correspondent wasn’t told to keep the things confidential.)
X [Ada Goodrich-Freer], “To the Editor of the Times,” Times [London], 9 June 1897, p. 6.

A few days later, another letter from another visitor opens by denying that guests were requested to keep the name of the house under wraps. In the end, the writer pins the phenomena on fakery and hallucination, and anything leftover is a result of

earth tremors (Ballechin is only 20 miles from Comrie, the chief centre of seismic disturbance in Scotland), by the creaking and reverberations of an old and somewhat curiously-constructed house, or by some other simple natural cause.

And then The Times printed three letters — and in a single column — regarding the original article. The first is signed J.M.S. Steuart, the owner of Ballechin House, who says he wouldn’t have rented it to Lord Bute if he’d known it was to be Party Central for ghost hunters. The next is from a previous tenant, who denies having had any role in starting rumors that the house was haunted. The last is from someone who pooh-poohs the Society’s practice of hiding the identities of people involved in the cases they examine.
“To the Editor of the Times,” Times [London], 14 June 1897, p. 6.

By now the Society was attempting to minimize the damage. The Times printed secretary Frederick Myers’ letter responding to earlier letters. He mentions the many tests the Society uses on alleged hauntings, stipulating that it would have been “pedantic” to test for seismic activity. Regarding hiding identities, he says the members encourage their informants to go public — but they respect those informants’ wishes when they choose privacy.
Frederic W.H. Myers, “To the Editor of the Times,” Times [London], 15 June 1897, p. 12.

The Society also used its own publications to distance themselves from Ballechin.
“Ballechin House,” Journal of the Society for Psychical Research 8 (July, 1897) p. 116.

Not until 21 June 1897 did readers of The Times get a chance to hear from someone who was at Ballechin — not to investigate — but to work and, specifically, to butle. Harold Saunders explains that he had been at his assignment only a few days before maids and family members began reporting “ghostly noises.” Hesitant to think these sounds were anything more than hot-water pipes banging or, perhaps, branches hitting the house, Saunders did some of his own ghost hunting. Despite sitting up late across three weeks, he never heard a thing. Finally, though — he did hear a thing. It was a “tremendous thumping just outside my door.” He adds, “The same thing happened with variations almost nightly for the succeeding two months that I was there.” The experience was preceded by a chill, “like suddenly entering an ice-house,” and one night, Saunders heard “two distinct groans . . . like someone being stabbed and then falling to the floor.” When he finally went to bed, he felt his sheets being lifted. He attempt to light a match, but “my hand was held back as if by some invisible power.” Saunders ends by saying that, if the correspondent who had started the controversy “had stayed as long at Ballechin as I did and had some of my experiences, he would have a very different tale to tell.” (On the same page, prominent geologist John Milne affirms and develops the “seismic disturbances” theory postulated in previous letters.)
“To the Editor of the Times,” Times [London], 21 June 1897, p. 4.

Saunders provides an intriguing chronicle of Victorian ghost hunting conducted by someone who seems to have neither experience nor any previous interest in that pursuit. Altogether, these sources reveal how ghost hunting can be a highly debated endeavor. Indeed, that seems to be something ghost hunters can count upon throughout history.